The inspiration for the Toonerville Music Festival comes from the Pelham Manor Trolley that met all the trains in the early 1900s and inspired cartoonist Fontaine Fox to create the popular and nationally syndicated comic series Toonerville Folks (a.k.a. The Toonerville Trolley That Meets All the Trains) which ran from 1908 until 1955. You can read more about it at https://en.wikipedia.org/wiki/Toonerville_Folks.

“After years of gestation, the idea for the Toonerville Trolley was born one day up in Westchester County when my wife and I had left New York City to visit Charlie Voight, the cartoonist, in the Pelhams. At the station, we saw a rattletrap of a streetcar, which had as its crew and skipper a wistful old codger with an Airedale beard. He showed as much concern in the performance of his job as you might expect from Captain Hartley when docking the Leviathan.” — Fontaine Fox

The Pelham Manor trolley made is final run in 1937 and the final pass was issued to none other than Fontaine Fox himself. 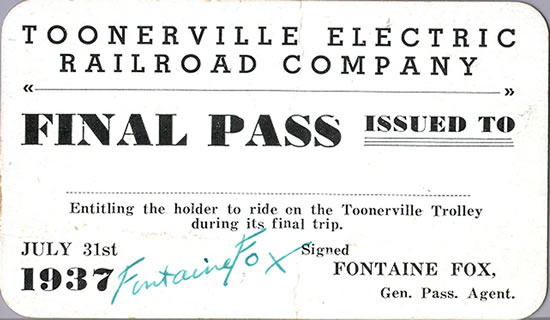 More than 80 years later, the organizers of Pelham’s Toonerville Music Festival have decided to revive the infamous trolley by renting a trolley to ferry residents of Pelham to and from the music festival throughout the day.